skip to main | skip to sidebar

Magazines Team Up to Tout 'Power of Print'

As Pickup in Ad Sales Boosts Their Confidence, Publishers Point to Strengths They Say Remain Relevant in Internet Age.
By RUSSELL ADAMS and SHIRA OVIDE

Magazine executives spent much of last year telling anyone who would listen that they were taking their brands digital.

Their message this year: Print rules. 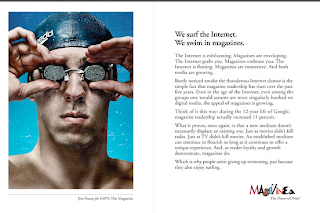 Young & Rubicam
Olympic medalist Michael Phelps is pictured above in the first of a series of ads promoting the power of magazines.
Five leading magazine publishers have pitched in on a multimillion-dollar ad campaign touting the "power of print." They say nearly 1,400 pages of the ads will be sprinkled through magazines including People, Vogue and Ladies' Home Journal this year.

The ads press the case that magazines remain an effective advertising medium in the age of the Internet because of the depth and lasting quality of print, compared with the ephemeral nature of much of the Web's content.

"The Internet is fleeting. Magazines are immersive," says one ad, which is slated to appear in May issues of the participating publications. The first spread features a photo of swimmer Michael Phelps from ESPN The Magazine, with the headline "We surf the Internet. We swim in magazines."

The effort is scheduled to be announced Monday at an industry conference in San Francisco.

Just a few months ago, a handful of publishers announced another collaborative effort aimed at readying magazines for the migration of readers to digital devices. Since then, however, industry executives say advertising has begun creeping back into magazines after a two-year drought. The improved results have given them more ammunition to persuade readers and advertisers alike that the ink-on-paper business isn't dying.

"A lot of us sat back for way too long and listened to all this abuse and said nothing about it," says Jann Wenner, who orchestrated the campaign. "Meanwhile, we sit on top of one of the greatest mediums," adds Mr. Wenner, whose Wenner Media publishes Rolling Stone and US Weekly.

The five publishers say they have committed to run the first of the ads in the front one-fifth of their titles' pages, and have agreed to run all subsequent ads in the first half.

The ad space they are devoting to the campaign is valued at more than $90 million, based on public ad rates for each of their participating magazines. They say they have never before attempted such a large-scale campaign.

The spark for the campaign was a "manifesto" Mr. Wenner penned last year, in which he said that just as TV didn't kill magazines, the Internet was a threat only to publications that lost focus on what makes magazines unique. "In a certain way, this campaign is aimed at the magazine business itself," Mr. Wenner.

That the campaign might seem out of sync coming from an industry that has spent so much time trying to prove it can hold its own in the digital arena is beside the point, executives involved in the collaboration say. The purpose of the campaign is to remind people that these brands are rooted in print products with huge cultural and commercial influence, they say.

"Going digital is very important to Time Inc., but I don't want my clients to believe that no one is reading the printed word," says Time Inc. Chief Executive Ann Moore.

Even so, the Internet is expected to continue attracting a growing proportion of ad dollars away from traditional media. The share of global ad spending devoted to the Internet will rise to 16% by 2012, up from 12% last year, according to ZenithOptimedia, part of ad company Publicis Groupe. By the middle of the next decade, the firm expects the Internet to overtake newspapers as the world's second-largest advertising medium, behind TV.

Magazines' challenge is to be ahead of the digital curve while recognizing that for now print is their best asset, ad buyers say. Magazines are grappling with how to adjust to new devices like Apple's iPad, the tablet computer that is sparking fear but also enthusiasm in the media business.

"The iPad is bringing sexy back to magazines," says Robin Steinberg, an executive at Publicis's MediaVest arm who advises marketers on print advertising.

Amid a decline in spending on traditional media, other industries are making similar pitches for themselves. The Newspaper Association of America has run repeated ads to publicize the number of people who read a daily newspaper. As with the magazine campaign, the newspaper trade group says its ads are designed to counter the notion print is a dead medium.

The local-TV industry's trade group is starting an on-air ad campaign this month to encourage companies to advertise on their local TV stations.

The Internet Advertising Bureau couldn't be reached for comment.

The Michael Phelps ad is accompanied by an essay about the appeal of magazines. "Even in the age of the Internet, even among the groups one would assume are most singularly hooked on digital media, the appeal of magazines is growing," the ad says. The publishers point to data from Mediamark Research & Intelligence that show magazine readership has risen 4.3% over the past five years.

There are seven spreads in the series, four of which are essay-like and three that are more lighthearted. The campaign's signature is "Magazines: the Power of Print,'' with each letter of the word magazines appearing as it does in the title of a major publication. The "a'' is from Vanity Fair.

Source
Posted by AGC The Creative Advantage at 10:45 AM

Promote Your Page Too